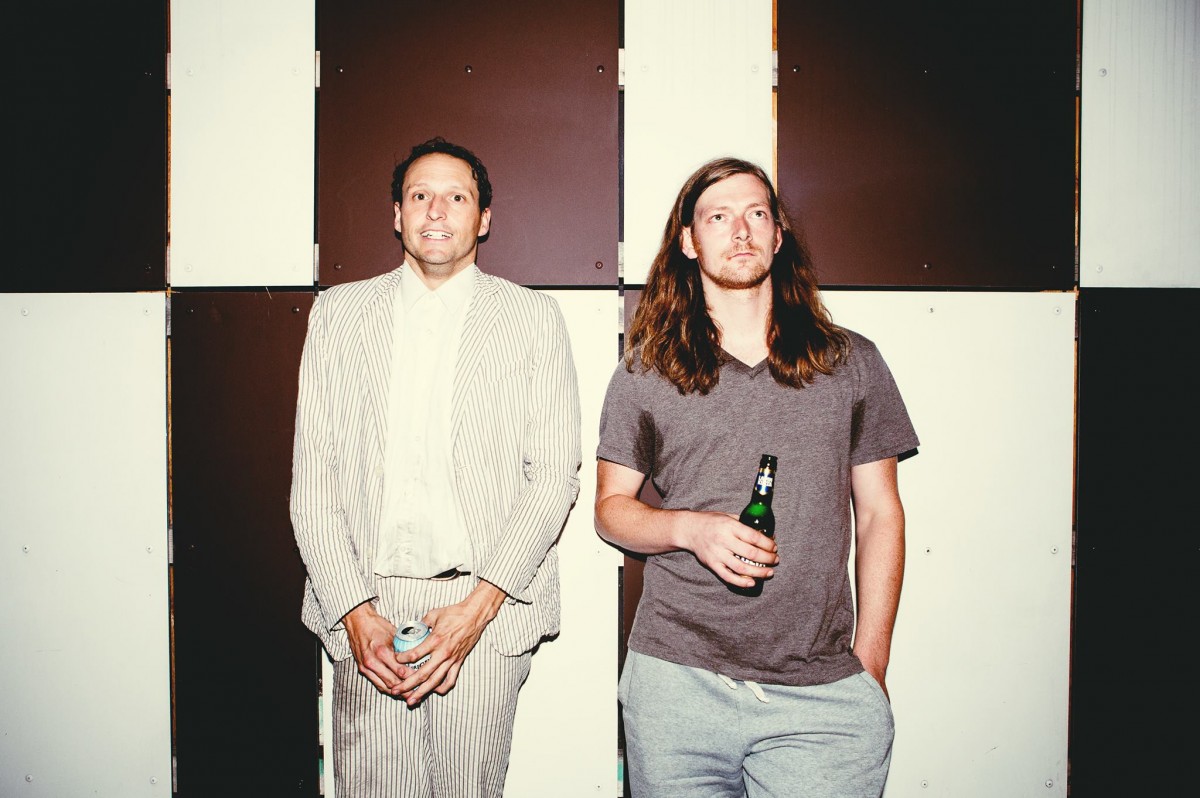 Vin Blanc/White Wine, was started by Joe Haege as nothing more than way to pass time on tour when he wasn’t driving. For some reason, he was unable to read a book without puking in the car but he could easily stare at his computer and work on ridiculous synth-based melodies and beats. Out of this time came his first release under the Vin Blanc monicker, “Chroma Key”(Polyvinyl Records). Over time the project simply became his place to put ideas that neither fit with 31Knots nor Tu Fawning, his two other bands at the time. And yet with even more time to kill in the van while playing with Menomena (they had a driver!), he just just kept exploring and branching out. During this time, he and the Menomena sound man, Fritz Brückner (Blut Sport Disko, Plasma Police) became good friends. At the end of the tour, like so many performers and musicians, they uttered the oh so cliché phrase, “we should start a project together!”
Fast Forward 2 years when Haege found himself as a touring member in the Dodos and living in Los Angeles after living in Portland, Or for 15 years. Having just completed yet another album, “In Every Way But One” he wanted to release it only with friends and take a moment away from the feeling of music being an industry. This led him to working with 2 small labels, Party Damage (USA) and Discolexique (France). Always one to enjoy a good tour, Haege went out on a limb and ask Brückner if he wanted to be his band for a one time European tour. Once it was agreed they would do it they just had to learn to play the songs, which would be like learning to put together a puzzle while building the pieces. Over the course of 25 days in Leipzig, Germany, the two of them reconstructed Haege’s songs with only the use of a very simple drum kit, a guitar, sampler, juno keyboard and an insane amount of pedals. Immediately after learning how to play the songs they went on a month long tour. And they loved it.

Now as an actual 2 piece band they have been able to create their own sound, of biting guitars and stripped down drums smashing into theatrics, ballads and electronic beats. With Haege’s voice always anchoring the melody, it’s nothing short of watching a balancing act between a crooning singer songwriter and some dystopic late 70’s synth punk band.
Having so much fun performing the songs live, Haege left Los Angeles and moved to Brückner’s hometown, Leipzig. Currently they are planning the release of their first collaborations, including a 7-inch in October and a repressing of “In Every Way But One” that will include 5 live songs from the their first tour, as well as beginning work on a 3rd album.

One can only guess where they could possibly go from here. But for those who are fans of music that attempts to genuinely blur the lines of genres, that’s what will keep you wanting more.